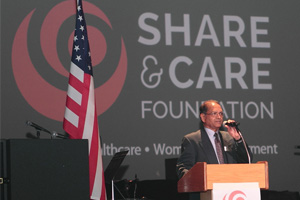 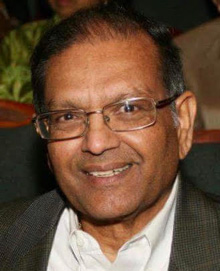 Arunbhai Bhansali, a philanthropist, an entrepreneur, and a visionary co-founder of Share and Care Foundation for India passed away on Tuesday, August 21, 2018 in New Jersey. He is survived by his wife Sudha, sons Manan and Maulik, grandchildren Kaia and Aran, and sister-in-law Tejal. Until the night before he went to the hospital for an open heart surgery, he remained engaged in pursuing charitable endeavors and communicating to project team members to chart a course of actions to help the challenged.

Arunbhai was born in Kolkatta in 1941 to parents Kirtilal Bhansali and Prabhavati. He moved to Mumbai at a very tender age after his parents’ death and completed his schooling and undergraduate studies. He felt deep down in his heart that he was blessed by the Almighty, who held his hand in dark days, kindled hope within him, and guided him to look forward with courage. He never forgot how happily 17 members of his family lived in two rooms. While growing up during many family crisis and problems, he became aware that people intrinsically are not bad, nor do they intentionally cause pain, but act as dictated by their necessities, circumstance, missteps, systems or prejudged ideas. He strongly felt that the principles, values and ideas that he was exposed to at a young age provided him the ability and skills to develop into a person that he eventually became.

Arunbhai migrated to USA in 1966. As one of the first Indian diamond merchants to establish himself in New York, he succeeded in breaking into a closed network and built awareness and trust in Indian manufacturing. He became a founding member of the Indian Diamond & Colorstone Association and over the next 50 years, built a successful business, helped to establish other Indians arriving in NY, and promote the diamond industry.

His love, affection, and commitment to India always remained. With a deep awareness of someone holding his hand to help him while growing up in challenging times, Arunbhai always carried a burning desire to help others when it was his turn. With another five likeminded close couples, who shared the same values to help others and give back to the country they came from, together they gave birth to and founded Share and Care Foundation for India in 1982.

In an interview to the media in 2014, Arunbhai had said, “When we started Share and Care Foundation (SCF) in 1982, the ecosystem was much friendlier and community was in need of such platform. If I look back, I think the key reflection point was ‘what we do for our motherland’- when all of us were successful in our careers, got reasonably well established and all our needs were well satisfied. Most of us were very conscious that somebody’s charity was instrumental in our success, so we could get excellent education almost at no cost. In those days, it was almost unheard of that many of us could travel to USA for further studies or work as family income could not support such venture. So we thought it is the time for us to ‘Give back to our motherland’ who gave us solid grounding and education.”

In conversation with Rajmohan Gandhi (grandson of Mahatma Gandhi)


During the journey of over the past 35 years, Arunbhai served in various capacities - as a President, Chairperson & Trustee of the foundation which has helped over two million people with over $75 million funding support in the areas of Education, Healthcare, Women empowerment and post natural disaster rebuilding and rehabilitation.

Arunbhai, a diamond in rough who had a challenging childhood, became a shining star diamond with self-polished facets of: compassion, selfless service, seva, liberating the families from the cycle of poverty and bringing a social change in rural India by providing education, preventive healthcare, better hygiene and empowering women. Arunbhai’s guiding and leadership was a key element in the foundation’s success in meeting the goals.

In the last few years he focused on mentoring the next generation to take leadership positions in philanthropy and in early 2018 he started a US chapter of Mumbai based ‘The Breakfast Revolution’ that provides power packed meals to fight malnutrition in school age children. 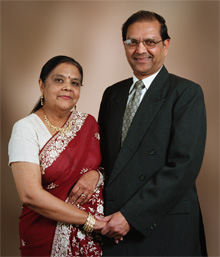 Arunbhai, also joined and served as Secretary of Bhartiya Vidya Bhavan, New York in its inception. As a member of the Gujarati Literary Academy of North America he also had a passion for creative writing both in English and Gujarati. He has published two books, one on poetry in Gujarati and the second one on the history and his observations about the journey of Share and Care Foundation – “Seeing through the Lens of Good”. Earlier this year, he had started work on his third book “Autumn Leaves” about being in the autumn of his life. Arun’s wide range of lifetime achievements will inspire and motivate the next generation to carry forward the torch of being of service to others.

Looking back at his life, Arunbhai recently noted in his personal diary: “Even a coin attains its full value when spent, so life attains its ultimate value when one knows how to forfeit it with grace when the time comes…… I also learned, I am gradually becoming old and will pass away, that is an inevitable reality. So, I feel time should never be wasted , nor live with someone else’s dreams. I believe not to be trapped by others preaching or thinking. Do not let the noise of other people’s opinion drown you out but listen to your own inner voice. This I learned what meaningful life that I want to lead in face of all the worldly success or sorrow. It gave me courage to do the right things and not to ride on two horses at a time. My insight dares me to choose one and I choose the right one.”

He continues, “I have not subscribed to the belief that nothing should be said about the dead. If people were evil in their lifetimes, death does not convert them into saints. Such falsehoods may be condoned when inscribed on tombstones but not in obituaries, which should be without bias and truthful. I have written few obituaries and condolences for the people I admired and loved. I did my best to be even handed as much as I could about them and I expect the same for myself”

He concludes by quoting Ghalib, who put it beautifully:
“Age travels at a galloping pace, who knows where it will stop?”
“We do not have the reins in our hands, we do not have our feet in the stirrups.”

We at Share and Care celebrate Arunbhai’s incredible life. We honor him by recognizing and following the legacy he has left behind to provide selfless service to all those in need. As a founding member, he carried a deep-rooted desire and vision to help all those in challenged segment of the Indian society and to bring them out of the vicious cycle of poverty to become self-sufficient and contributing citizens. This vision has guided Share and Care to sharpen its focus to develop and implement programs to bring this social change over three and a half decades in the areas of Education, Healthcare, Welfare, Women Empowerment, Sanitation and Hygiene.

Arunbhai, we treasure your values and will strive to continue the journey you started. Although you are physically not with us anymore, your spirit will always guide each one of us and strengthen our commitment of being of service to others. The Share and Care family loves you and admires your leadership and mentoring and we will miss you dearly.

The larger Share and Care parivaar wishes to convey our heartfelt condolences to the Bhansali parivaar. We grieve with you and reach out to comfort you and comfort each other.

We pray to the Almighty to rest the departed soul in eternal peace. 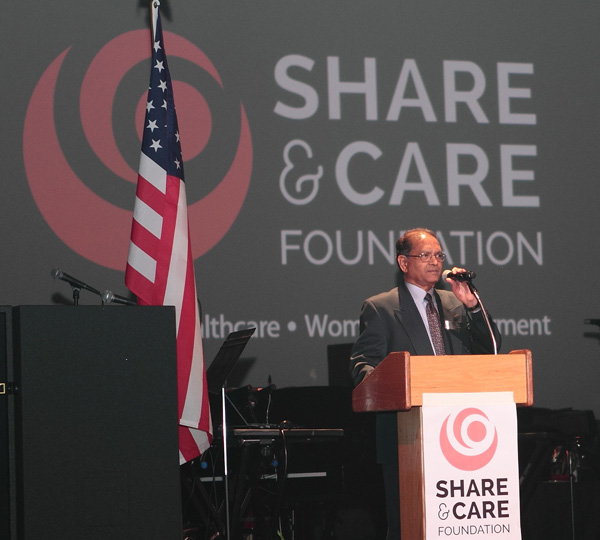