From Homemaker to Heroine

May 08 Posted by Matt Wenner in Female Empowerment 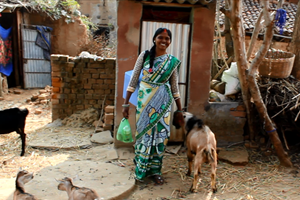 Our story starts when our partner NGO, Pradan, addressed the issue of persistent poverty for Amnari village goat farmers and their families, in spite of the area’s ideal conditions for raising goats.

Upon investigation, they found farmers were purchasing goats to replace the approximately 100 goats that were dying each year, which of course compounded the losses.

Looking deeper into the problem, it was discovered that 30% of the goat deaths were a result of improper food, unhygienic shed maintenance, and predator attacks. The other 70% were, shockingly, due to a disease outbreak, which was easily linked to a lack of knowledge of important deworming and vaccination practices to prevent outbreaks.

While vets were occasionally called on, they were scarce and of course, expensive.

Amnari Looks for a Solution

The local self-help group, originally organized and trained by Pradan, participated in a village-level meeting held to discuss how to address the outbreak and its adverse effects on the community. Somewhat surprisingly, Amnari Ajivika Gram Sangathan chose a woman from the self-help group — Jogni Devi — to serve as the village Pashu Sakhi, or “friend of livestock.” Pashu Sakhis, also known as para-veterinarians, are part of an alternative community-led livestock service and are trained to provide essential services to livestock farmers. 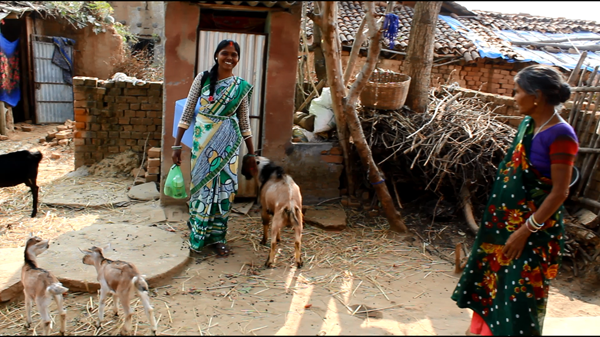 Jogni Devi works as the designated Pashu Sakhi to keep goats and other livestock healthy and profitable.


While it may seem that choosing a woman demonstrates a more enlightened mindset, the truth is the idea of Pashu Sakhis was originally created with the idea of training young men for the job. Among the many reasons this approach failed is that many were men — not youths as intended — who were reluctant, both psychologically and socially, to reach out and work with the majority of livestock caretakers: women.

Why women? Women were often left to care for small livestock in their husband’s absence, or because the family needed the added income. They also are traditionally caretakers of the sick, including animals.

Jogni first worried that it was inappropriate, as a woman, to take on the role of a Pashu Sakhi, or that she was even capable. Like most women, her mobility was restricted so she also worried that her family wouldn’t allow it, or the community wouldn’t accept her.

But in the end, because she had been trained on gender equity as a member of the self-help group, and because of the encouragement from the other women, she accepted the role of Pashu Sakhi.

Her newfound confidence motivated her to work hard to build her skills and to serve her community. She also decided it would help supplement her husband’s income working as a mason.

The village sent her to attend a three-day workshop on Integrated Livestock Rearing, which gave her hands-on training for administering vaccinations.

Once she was back home, she surveyed the villagers about their needs, and began organizing a vaccination camp. While there was plenty of resistance to a woman doing all of this, she successfully funded the first camp by convincing a number of families to pool their resources. She used the money to conduct that first camp and 90 goats from 30 families were vaccinated.

She continued trying to involve the entire community with door-to-door visits. She also enlisted the help of other self-help group members, training them on how to help motivate the families who had not yet signed on.

They eventually had a second camp where 130 families participated in vaccinating their livestock. The following year, 150 more families joined in.

It was a tough hill for a woman in a rural village of India to climb. She lost some of her own money when she fronted the cost of vaccinations and families later backed out. But she persevered, motivated by the successes rather than the struggles, and became a role model to many in her village. She also enjoys personal joy from what she’s achieved.

Today she is a master trainer and supporter of other Pashu Sakhis, who are working together to mobilize their communities and conduct regular vaccination and deworming camps.

Jogni has extended her work to 250 households in seven hamlets. More than 160 families are now enrolled in a formal system for livestock services, including scheduled vaccinations and recordkeeping.

“This assignment has now become a passion for me. I have learnt many things during the last couple of years. I feel proud while supporting my fellow Pashu Sakhis. It has been helping me in enhancing my skills and knowledge on livestock. In addition to this, my earning out of this has helped me in enhancing my own dignity.”