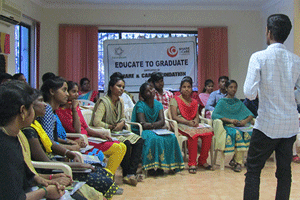 The Educate to Graduate Signature Program has been a consistent success for Share & Care, delivering repeatable results (a main goal for all of our programs) and measurable outcomes: Upon graduation, these scholars are earning an average  of three times that of their family income.

E2G began as a loan program in 2007, and has evolved into a scholarship program designed to give financial support to students who have shown their desire and ability to earn a college degree, but are unable to afford the tuition and living expenses.

E2G has so far graduated 1,614 scholars, more than half of which (850) are gainfully employed and earning an average salary of $6,500. For the 2019-2020 school year, 73 students were enrolled, with 65 more in the current school year. COVID-19 has interfered with school openings, among other things, but we responded with additional skill development training to help ensure successful graduates.

The E2G program is conducted in several regions of India. The following tells of the admission process from the perspective of the NGO Kalanjiyam in Tamil Nadu, but it also applies to programs carried out elsewhere, including Higher Education Support Trust out of Bharuch, Gujarat. 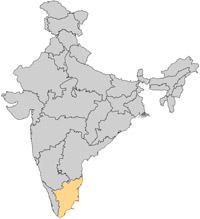 Country-wide, higher education is the single most important ingredient in fostering confident and enlightened adults able to achieve financial independence for themselves and their families.

To that end, we are receiving around 60 applications per year from hopeful students living in villages in Kancheepuram district, one of 38 in the state of Tamil Nadu.

Here, village populations range from around 350 to 1,500. The main source of income is agricultural labor, which is only available around 15 days each month on average, and earns local laborers Rs 60 to Rs 150 per day (roughly 81 cents to just over US$2.00 per day). Additionally, around 90% of the population of the district’s rural villages still use the open fields for toileting. The few homes with indoor facilities often don’t use them due to water supplies and lack of space, using these “rooms” for storage.

Having worked with this population for many years, our partner Kalanjiyam reports a 25% to 34% dropout rate occurring around grades 6th to 8th, with another 55% to 60% dropping out around grades 9th and 10th. Broken out by gender, young women have much higher dropout rates than males. Accordingly, literacy rates for the district’s male rural population is 84.18% vs. 68.96% for women.

Toward the goal of providing financial support while earning their college degrees, plus career guidance to obtain careers in high-paying IT and medical fields, we partnered with Kalanjiyam based on their proven expertise in sustainable change through community development:

In all, they have engaged with more than 1,000 rural and urban students to continue their education, often to graduation or college.

As part of this engagement, they also seek to provide various types of scholarships — as available — to lower-income students who have shown the will and desire to achieve an education that can pull themselves and their families out of poverty now, and for generations to come.

With goals commensurate to ours, Share & Care is able to take Kalanjiyam’s successful, knowledge-based program to the next level. 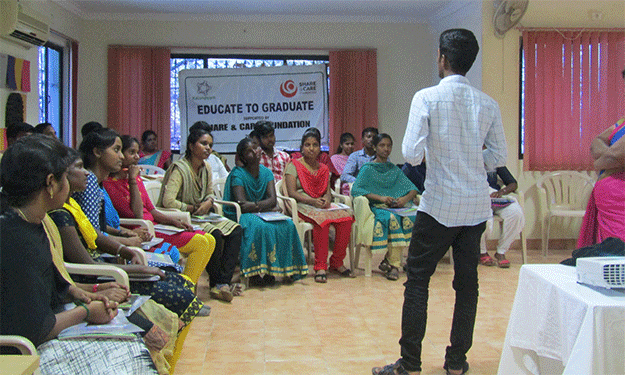 We began our alliance with Kalanjiyam in 2016 and have supported 50 students, with nearly half (24) already graduated.

Students submit their application that includes details about their education so far and their family situation. Eligibility is based on:

Based on the above criteria, applicants receive a home visit to learn more about their living situation and to interact with their family members.

The applicant’s previous schools are also visited, and teachers and other staff are interviewed for this feedback regarding the student.

Next, a personal, one-on-one interview is conducted with the applicant, followed by additional discussions with the family regarding the child’s choice of school and their intended studies.

Once selected, the scholar receives up to 80% of their college tuition fees, plus associated (fixed amount) financial support for living expenses.

Once in school, students also receive continual tracking, monitoring, and mentorship. During monthly assessments, students can discuss their academic performance and how they’re handling college life in general. Mentors work with each individual to help guide them through issues of productivity, low self-esteem, and myriad other barriers to their overall success.

This part of the program is especially important as rural children, even the most intelligent and driven, have little opportunity to develop well-rounded personalities. Without available role models, they often need assistance in developing leadership and future planning skills, as well as how to hone their own skills and talents, both personal and professional.

Parents and teachers are also consulted on a regular basis. Parents are kept up-to-date on any issues regarding poor performance, and teachers help determine if additional support for the student is needed through mentoring or counseling.

Support doesn’t end at graduation. Graduates receive additional assistance with finding a job (which begins prior to graduation), including using local contacts and other employment services.

For those who wish to continue their education, assistance is provided regarding degree options and finding additional financial support.

We are excited to be able to share a couple of success stories. There have been so many throughout the years we’ve supported E2G. First, we have Saranya.

Originally from Tirukazhukundram (also spelled Thirukkazhukkundram) in the Kancheepuram district, Saranya was the youngest of three daughters. Her oldest sister was able to attend college, received her degree, and is now married. The middle sister earned a BE in mechanical engineering. Even though their father is a farmer — and unlike the majority of his peers — this was all made possible due to his attitude toward education for his daughters, which he fiercely supported.

Given her older sister’s education successes, Saranya was counting on reaching the same if not higher levels of achievement. Then, four years ago, her family had a severe financial crisis when it became clear that the family’s support in paying for her older sister’s wedding and other housing expenses was more than they could afford.

Now trapped by overwhelming debt, Saranya was now destined to find a job immediately and abandon her dreams of a college education.

Ah, but it doesn’t end there. Saranya was able to turn her situation around when she applied to the E2G program. Once approved, she received 40,000 rupees (US$542.57) per year for her four-year nursing program at Mohamed Sathak AJ College of Nursing, Chennai. Her dream of serving others through nursing was now certain, and her spirit and drive restored.

Currently in her final year, Saranya has already secured a position at Gleneagles Global Health City hospital in Chennai, where she will begin following her final exams. Through continual contact with her Kalanjiyam mentors, she has repeatedly expressed her wholehearted thanks and appreciation for what the E2G program has allowed her to accomplish, and that through her career choice she has the opportunity to pay that forward.

Good luck Saranya! We hope to hear from you soon as you continue your life’s journey.

Bhautik had always wanted to go to college, and had decided on an engineering degree when he applied to Dhirubhai Ambani Institute of Information and Communication Technology. But it wasn’t until after he had been accepted that it  became clear his family could not afford to send him there.

Bhautik’s father is a diamond worker in Surat (Gujarat) and while he always kept his family safe and supplied their basic necessities, his yearly earnings of 85,000 rupees (US$1,152.96) was barely more than a third of the annual tuition his son needed.

Bhautik reached out to the E2G program through Higher Education Support Trust, and was later accepted into the program. Today, Bhautik has a degree in mechanical engineering and with assistance for job placement, he is starting as a product engineer at Sprinklr India Private Limited in the coming year.

The irony is that while Bhautik’s family was too poor to put their son through college, Bhautik will be earning 29,75,000 rupees annually (US$40,353.73), an astounding 35 times more than his father. For Bhautik, he now is able to honor his father’s years of work to secure his son’s future by providing for him in his later years.

For Share & Care, when we see our graduates earn 30 to 40 times that of their parents, we know that entire families (and communities) are being liberated from the cycle of poverty.

Chitra is all about breaking stereotypes. Not only has she chosen mechanical engineering as her profession, she hopes to help encourage other young girls to choose their path based on their interests, and not on cultural expectations.

“I am all about breaking stereotypes, who said
mechanical engineering is only for boys?”
—CHITRA

This is all in spite of the fact that Chitra comes from poor beginnings, including an alcoholic father who rarely worked. But her drive prevailed, she studied and worked hard and was awarded 1,000 rupees (US$13.56) due to her good marks in class X board exams — 423 out of 500.

The award came from Kalanjiyam, who was able to follow this up with support through the E2G program, and Chitra is today in her third year pursuing her BE in mechanical engineering at the Vi Institute of Technology in Chengalpattu, Tamil Nadu.

We are proud of her not only for her academic achievements, but for being a true role model for all girls, particularly those whose lives began in situations similar to hers.

Congratulations Chitra, we can’t wait to see what’s next for you.

We need to and will continue this valuable and proven program that is changing the lives of families every day. Education is at the heart of our mission and we hope you can help support these deserving scholars, their families, and their generations to come.